Already 16 years on the scene between cyclo marathons

The third Sunday of May belonged again to the cycling event in Seredi. The traditional DHL Sereďmarathon and children's Sereďmarathon took place there. Both events broke the record number of participants this year. For the main race, all the "tickets" were even sold out. Cyclists from continental or world tour teams have already shown interest in the race, which is an excellent sign.

The organizers were very pleased with the number of participants. The limit of competitors for this year was set for the DHL Sereďmaratón 300 and the children's Sereďmaratónik 250. "Both events were sold out. In addition to the official limit, a few dozen over-limit places were also reserved, but with an incomplete package - that is, without a package of coffee, champagne, or other gift. These seats are also sold out. We tried setting a limit to see what the interest would be. We also wanted to know what the course would be and how we would handle it. This year, we planned the delivery of the packages a day earlier as a pilot, which had a positive response. So our plans have come true," explained the registration coordinator Barbora Javorová. 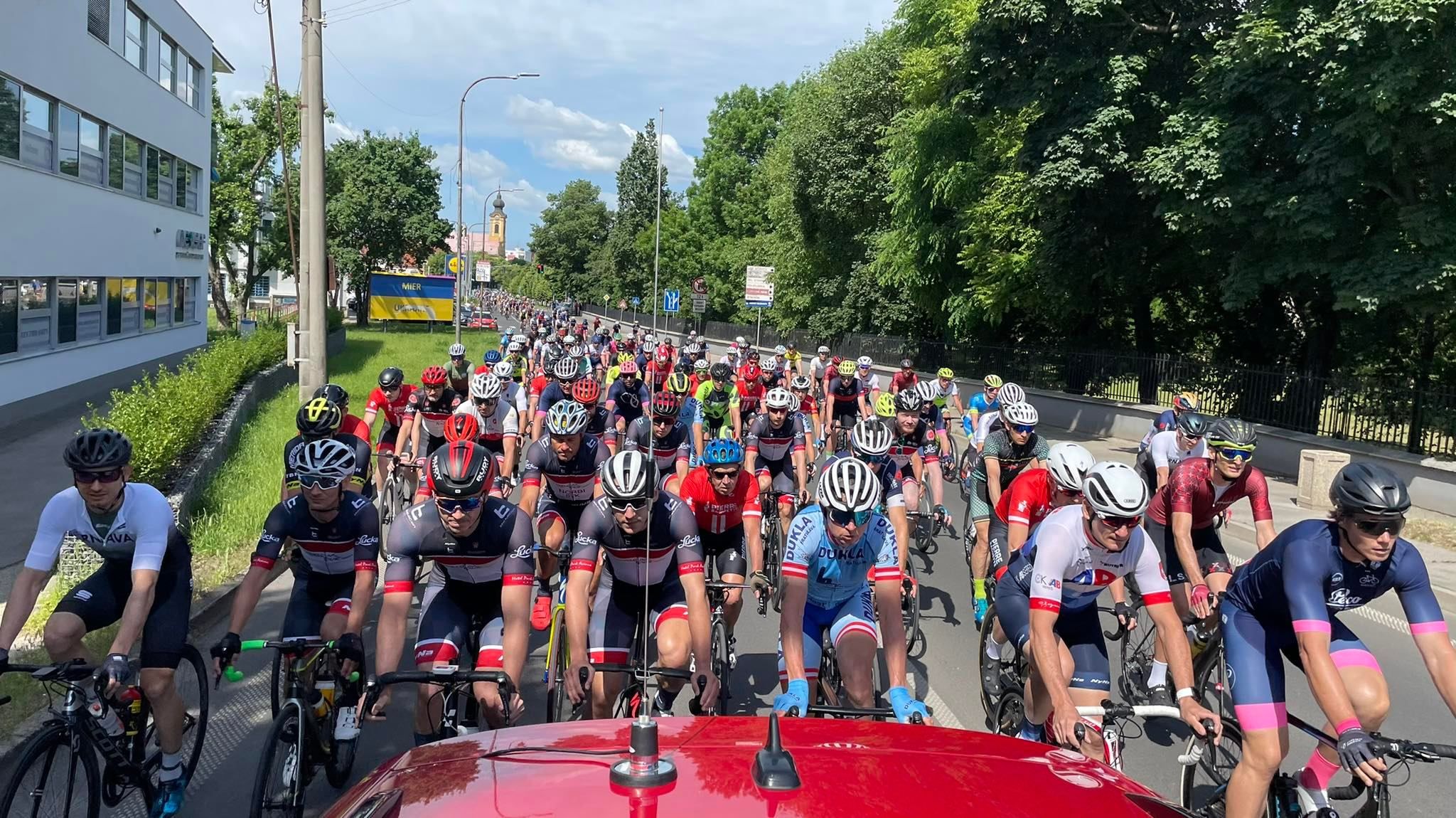 The changes also concerned the race route. Since several large-scale road repairs are underway, which are associated with traffic restrictions, the organizers had to present several variants to the road managers and specific authorities. In the end, it was possible to find a compromise in the form of a route that was 129 km and extended more into the Nitra Region. "The race route was adjusted literally a few days before the race. Not all sections were ideal, so we tried to find quick solutions within the team to ensure a smooth transition for cyclists. The route led through several railroad crossings, but two of them were in bad condition. We resolved the situation with the ŽSR infrastructure manager, who responded quickly and helped us repair the given crossings. Likewise, the road administration in the Nitrian and Trnava regions took care of the lightning mowing of the roads and the repair of unevenness. Therefore, we would like to thank all employees and officials for the positive and speedy resolution of the situation. We must also mention the mayors of the municipalities, motorcyclists from the Urban Driving School and volunteer firefighters, who, together with the state and city police, secured the intersections, which significantly helped safety. We appreciate it very much," thanked transport coordinator Dominik Tvrdý.

News and changes at the marathon came this year as well

Another novelty was the U25 category, i.e. the best driver under 25 years of age. This competition was covered by the main partner Verve facility services. The white jersey was worn by cyclist Lukáš Sokolík from Slávia CAT Trenčín. The jerseys for the winners were again produced by the Slovak company NyNa.

Since a larger number of cyclists was expected, the distribution of packages was also carried out a day earlier on Saturday afternoon. This news was appreciated not only by cyclists from the surrounding area, but also by those who arrived in Sereda from afar a day earlier. It was also LIVE information that we published directly on the site. Based on the visits to this sub-site, we think it was a good choice. :-)

Materials from sugar cane were used in the BIO cycling bottle made in the Netherlands especially for the DHL Sereďmaratón race. Thanks to this, the bottle can break down faster in nature and is gentler on it. After the positive response of the cyclists, the organizers also served it at the buffet in addition to the start packages. Several cyclists appreciated this fresh benefit. A cup of fresh coffee from Bozin roastery as well as a freshly tapped beer from partner Žiwell or radler from Birella awaited each cyclist on the square as a reward. The Relax zone was also new, where competitors could relax and stretch in the shade.

New names on the podium

Before the race, the starting list was filled with names that puzzled the "tippers" in the hillclimb competition, the points competition, the rider under 25, or the overall victory. The pack was packed with strong teams and names that made up the course of the race throughout the day. From the beginning, small escapes were formed, which were gradually swallowed up. The only escape that formed was composed of the riders of the Trnava clubs - Ľuboš Malovec (Trnava cycling team) and Lukáš Babač (Cyclists Trnava). On the route, they collected all the first places in the mountain and points competition, which guaranteed them to win the jerseys. However, in the last kilometer, the peloton swallowed them up and the winner was decided only by the final sprint. The correct position in the peloton was chosen by Tomáš Cepka from the ZMLR team, who crossed the finish line first, and his words at the finish line spoke volumes. : "Finally I did it. I've been trying to get first place in the race for almost ten years. It's a beautiful feeling, it's amazing. I'm really looking forward to it. I've been giving status all week and watching how many years I've been coming here and for me it's like winning at home. I even have points for the Trnava Cycling League, as the Sereďmaratón is part of them, so it's a double hit." Tomáš is also an editor at MTBIKER.sk and will even report on the race, so we're looking forward to his reactions and overall assessment and the course of the race.

The women also got their way

This year, the organizers prepared several categories and prizes for them, with which they wanted to motivate them to participate - which they succeeded in doing. Up to eleven of them registered. the other three could not participate due to illness or injury. Among the women, Alžbeta Bačíková from CK DUKLA Bratislava did best, winning on all fronts. In addition to the yellow jersey for the overall best woman, she also won the hill climb or points competition. Tímea Štrbáková from PROefekt Across CST team took second place and Barbora Dvořáková from Cyklo Team Havířov took third place. Congratulations to the girls.

The winner's statement after the race: "The 16th year of the Sereďmarathon went very well. The new track was excellent and even though it seemed easy, it was challenging. :-) I praise the organizers who continue the fine tradition and try to improve year after year. Really, by Slovak conditions, the Sereďmaratón is a very well-organized event. I also welcome the equalization of awards for women and men at the premiums, which is a complete novelty in the Slovak cycling world. It's great that you also awarded women separately in this context. This is the way to go take away. The security during the race was also at a high level. I also highlight the approach of the organizing team, which is excellent, while you will not encounter rejection or words, you can't. This is a revelation in Slovakia, and the attitude of these cycling enthusiasts from Seredí should be appreciated. I wish to the organizers, so that their enthusiasm lasts as long as possible and that they have many more successful years." 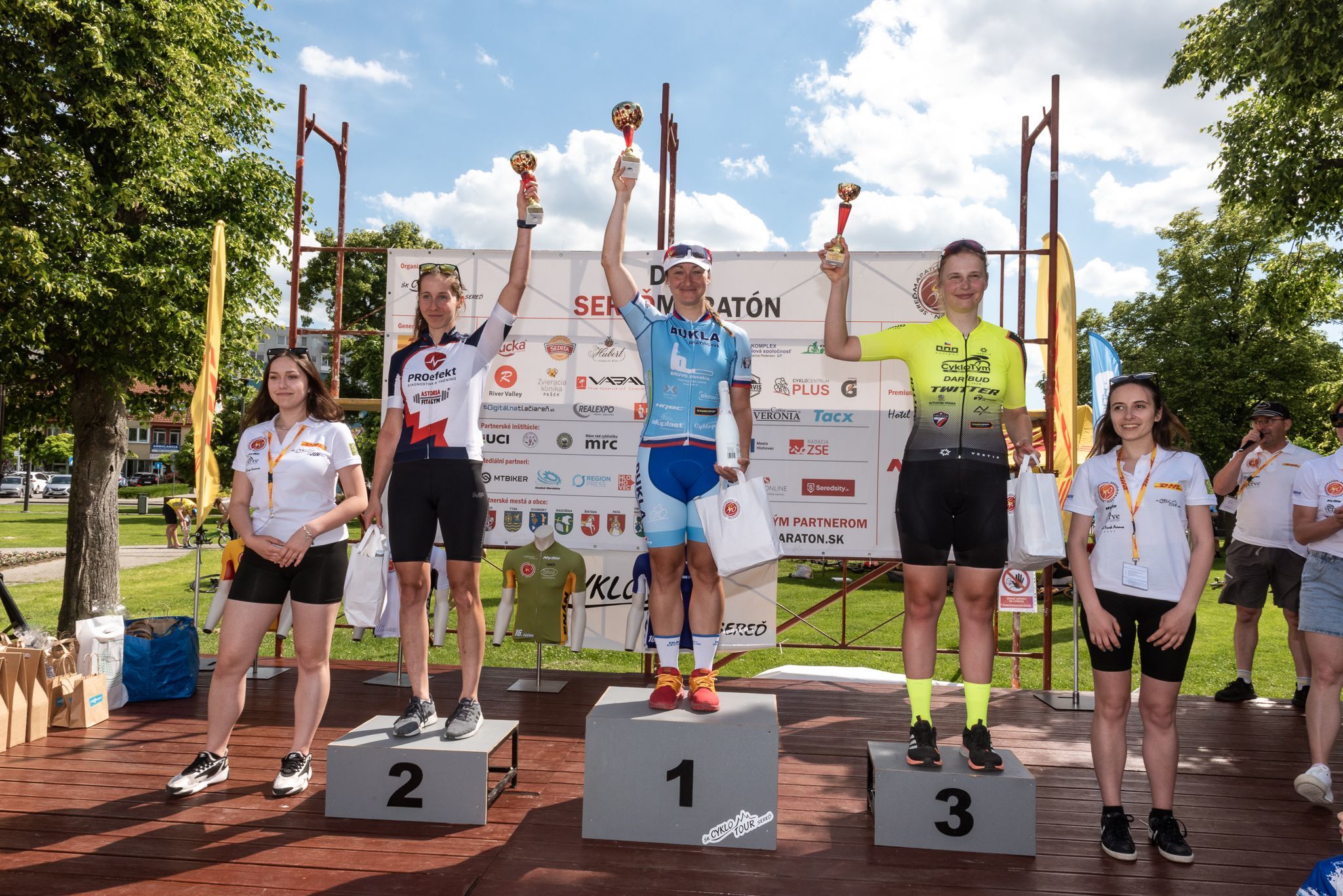 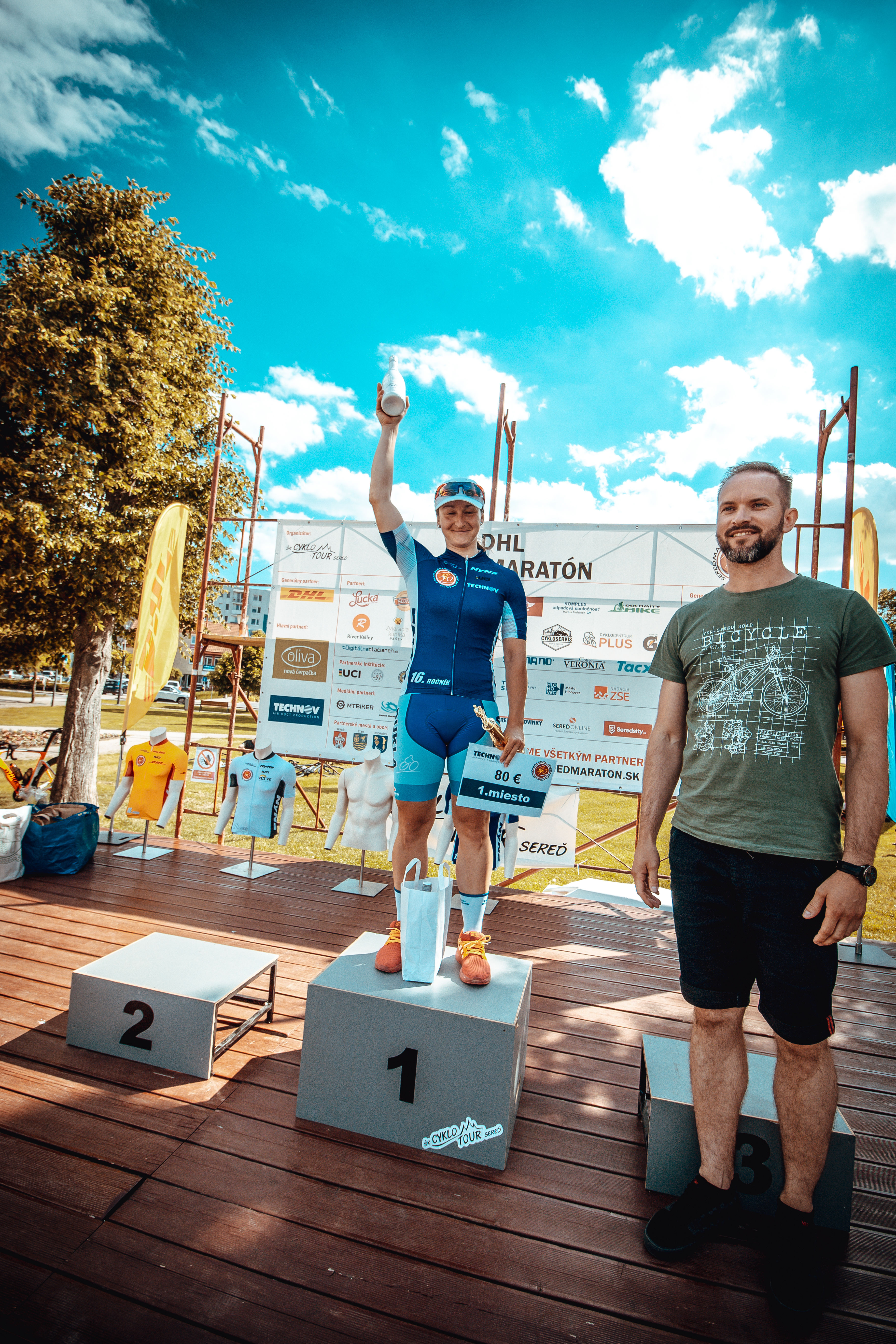 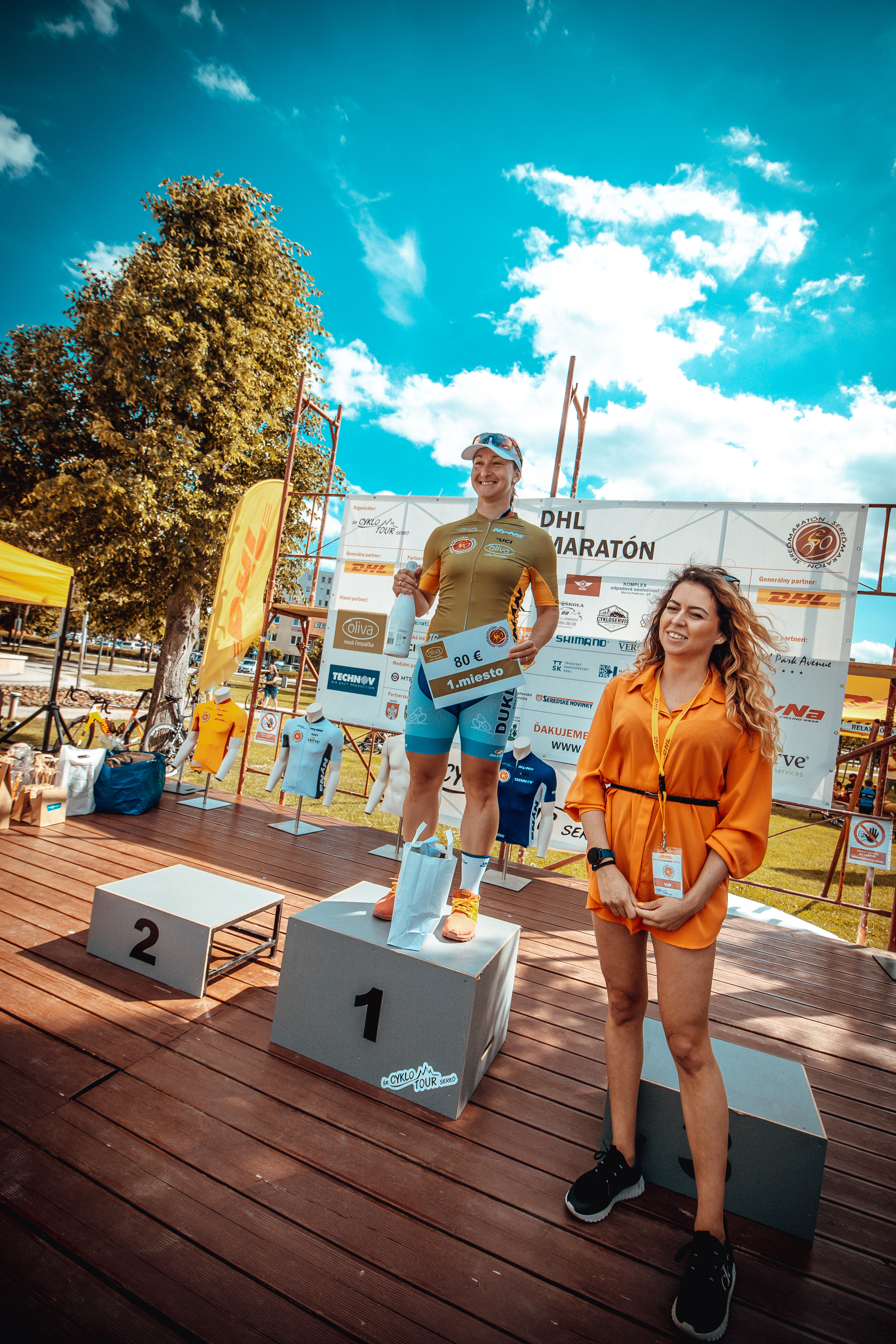 Last year, there were three times as many competitors at the start of the race. Now it was 5 more. Up to 255 children tested their strength on the circuit in the park area. After the race, various competitions and a lot of fun were prepared in the DHL Fan Zone. The huge number of children pleased the organizers, it testifies to the ever-increasing popularity of this race and cycling itself.

A VIP guest from the TOP cycling world

The participation of Erik Baška, who currently wears the jersey of the Dukla Banksá Bystrica team, was a pleasant addition. Last season he rode in the professional world tour team Bora-Hansgrohe alongside Peter Sagan. Moderator Roman Baréniy interviewed him in front of the visitors about what it's like to ride, as a professional cyclist, how his recovery is going after his illness, and his plans for the future. This was followed by an autograph session and an evaluation of one of the categories. 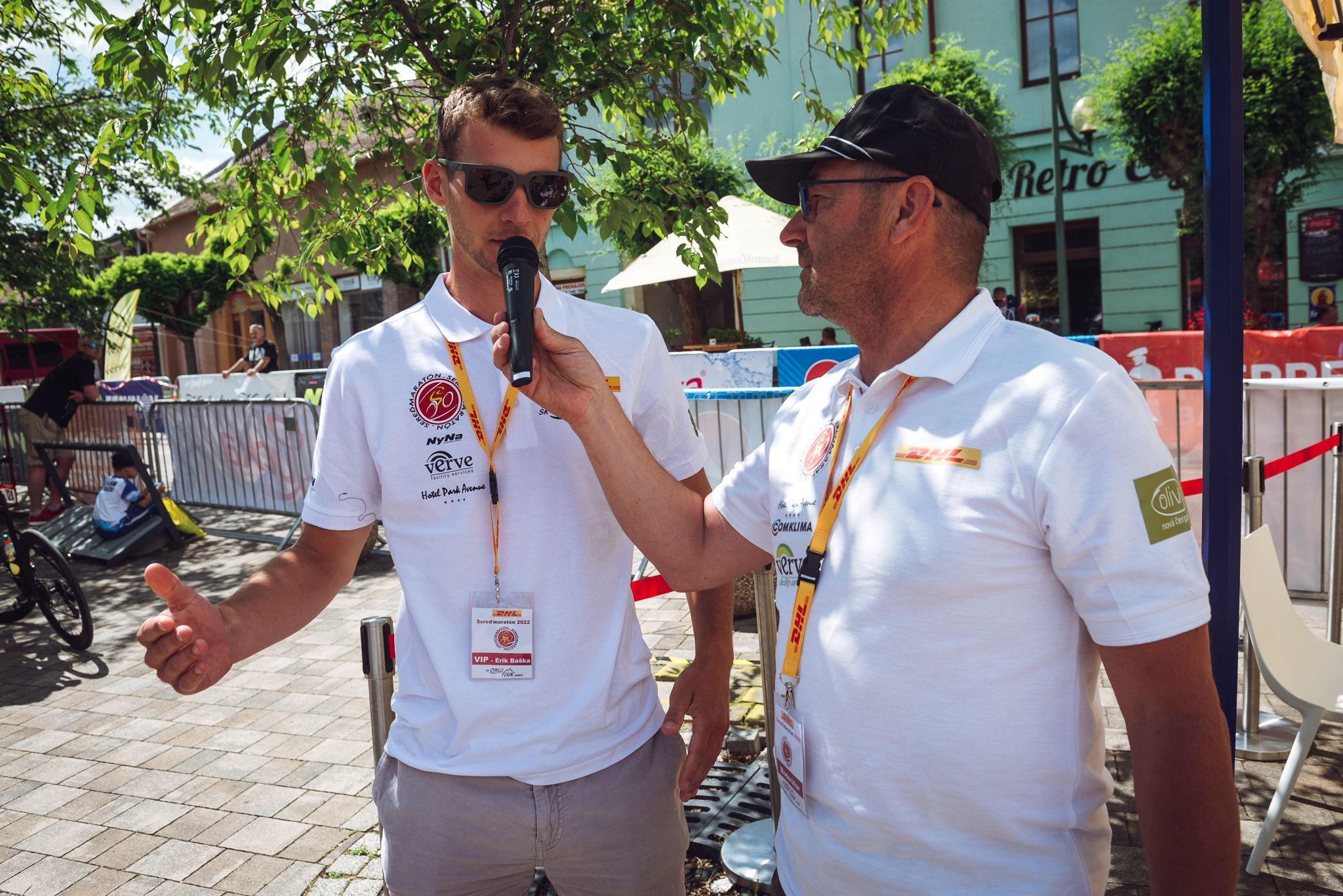 The impact on the environment also affects cyclists. In addition to the zone on the route, where garbage or used bottles could be thrown away, cleanliness coordinator Tomáš Poláček also took care of order in the square: "We have set aside places for waste separation in the square. We made sure that the garbage was sorted according to which garbage container it belongs to. We have replaced plastic materials with paper or easily decomposable ones. Even in the VIP zone, toasts were made with glass glasses. :-) "

How does the director himself evaluate the race?

At the end, we asked Lukáš Riha how he evaluates the race. Were goals and expectations met? And how does he react to sold-out starting places? "Preparing a race is like planning a project. As I work in the field of project management, I know that implementation requires time-finance-personnel. All three inputs are connected and you cannot underestimate any of them. We succeeded. With hundreds of hours of preparation covered by the financial support of partners, we and a team of people managed to realize the 16th year in a row. I am incredibly appreciative and grateful that the race has paid off in the form of a positive response from the racers and sold-out tickets. The important thing was that everyone reached the finish line alive, we had no reported serious injuries or complications on the way. I would like to thank all the police forces, volunteer firefighters, mayors and foreman on the roads, partners and especially the city of Sereď for supporting our event, or the authorities in processing permits, thanks to which we were able to unpack it again on Sunday and create another sporting experience with a great atmosphere. We all worked together as a team and achieved victory in the form of a beautiful event and that's what I'm most happy about." 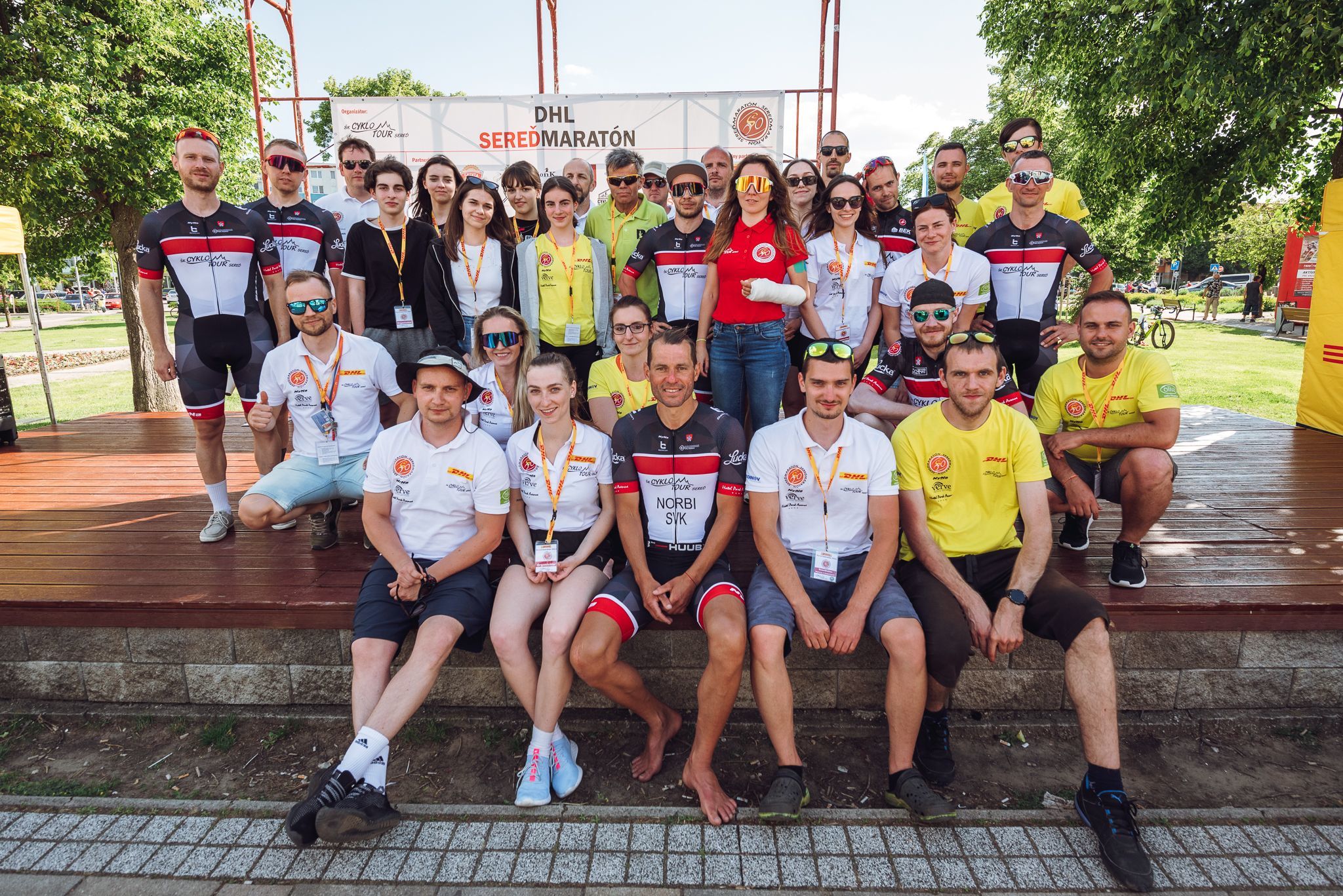